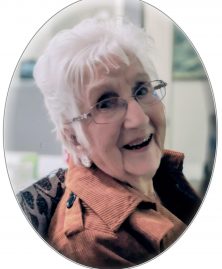 Cecilia Josephine Upton, 101 ½ years old, passed away peacefully on October 30, 2021
At the North Shore Hospice in North Vancouver surrounded by the love of her family.
Mrs. Cecilia Upton was a Secular Franciscan who was a long-time member of the Traditional Latin Mass Community in Vancouver (dating back to its very early days). She was born on June 8th 1920 in a small cottage in Leeds, Yorkshire, England, and raised by her father Thomas Dent, and her Irish Catholic mother also named Cecilia. She started a hair salon at 18 years old in England with the help of her mother. The salon was so successful that after a year, she was ready to open a second salon. Before that could happen, Cecilia, at 25, met and married her future husband Melvin, a member of the Canadian Air Force stationed in England during World War II. Mel returned to Canada in June of 1945 and Cecilia, a war bride, left England in August of 1945 for Mel’s family home in New Brunswick Canada. With their son, Tom, and daughter, Debby, they moved across Canada (twice!), settling in BC – first on Vancouver Island and then in North Vancouver where she lived for the past 58 years.
Cecilia was very active in the many parishes she belonged to across Canada, but most closely connected to the Latin Mass and the parish community at Holy Family in Vancouver. Cecilia possessed a giving spirit; her sense of community and devotion to her family was intrinsic to her life. Her legendary baking for potlucks, knitting clothes for babies, helping in the kitchen after mass, doing perms for ladies in long-term care facilities were just a few examples of her many commitments to others. Cecilia was always there to help whoever needed her: to listen, to provide sensical advice, and an infinite number of prayers for vocations and those in need. Cecilia, a devout Catholic, was very strong in her faith and a true inspiration to those who knew her. She was a lady of great fortitude who endured many health challenges throughout her life with grace and determination. Cecilia was an immense supporter of her grandchildren and great-grandchildren. She possessed a wonderful sense of humour, loved a good joke, and always had a twinkle in her eye and a smile at the ready. Her immediate family, her parish family, and her many friends were truly blessed by her presence. She was our mother, mentor, friend, protector, support, confidant, spiritual advisor, and matriarch. Her spirit will live on in the hearts and memories of the many people she touched through her words, actions, and prayers. Cecilia was preceded in death by her husband, Mel Upton, and her son, Tom Upton. She is survived by: her daughter Debby Bovill (nee Upton) and Adrian Walker (deceased), daughter-in-law Brenda Upton, Zak Upton, Arthur Bovill, Joe Bovill and Brooke Dixon, Georgia, Aden,Asha, Candi Bovill, Jamie Bovill and Felecia Ahluwalia, Clark, Ava, Jasmine, Jaiden, nieces Christine, Celia, Catherine, (in England) Judy and Bob Perry (Vancouver Island) Prayers will be said at 7pm on Thursday, November 04, 2021 at Holy Family Parish, 4851 Beatrice St, Vancouver, B.C. Where A traditional funeral mass will be celebrated on Friday November 05, 2021 at 10:00am. Reception to follow in the church hall. In lieu of flowers, memorials or donations may be made to Una Voce Canada https://unavocecanada.org